In honor of Star Wars Day, here are the best Star Wars characters to meet at Disney.

The parks may not be open now, but you can still plan for your next trip – a little planning makes all the difference.

Galaxy’s Edge is the newest land at Hollywood Studios in Walt Disney World.

This new land offers Star Wars fans the opportunity to ride new attractions, build their own light-saber or droid, and meet new characters.

Today I want to share with you the 5 best Star Wars character meets for your next Disney vacation.

Before heading out to meet your favorite Star Wars character, here are a few important things to keep in mind.

Now that you know what to expect, here’s who you’ll want to add to your must-see list!

Who doesn’t want to meet this popular droid from the latest trio of Star Wars movies?

BB-8 is an easy meet for everyone.

You’ll also be surprised to find out you can interact with him, it might be droid-speak but a cast member will be nearby to translate.

Another fun character meet is Chewbacca, the friendly Wookiee.

Chewbacca might be a bit scary for some children given his height and appearance.

Next up we have Darth Vader who is another intimidating character meet.

Don’t expect any chit chat or friendly vibes here. The force is very strong with this one.

Everyone visiting Galaxy’s Edge is treated as though they are guests on the planet of Batuu.

Therefore it is the norm to see regular Star Wars characters throughout the land.

Here is Kylo Ren accompanied by a few stormtroopers.

If you see him out, walk right up for an impromptu meet.

Make sure to get your camera or phone out quickly to capture the moment.

Lastly, we have a character who has become a beloved favorite over the past few years.

Rey Skywalker is friendly as they come and can often be found hanging out with Chewbacca or working on her ship the Millennium Falcon.

Make sure to check out Mom Resource’s guide on easy princess hairstyles to get a look similar to Rey’s or maybe even Princess Leia’s.

It is very common to see these types of hairdos when visiting the parks.

If you would like to know more about meeting characters at Disney World you can visit the character list for every park on WDWspin. 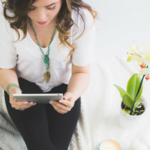 Want to get featured on the blog? Leave your details here!

Success! Now check your email to confirm your subscription.

Amber Delashaw is the owner of WDWspin.com and author of "So You Haven't Been to Disney in 5 Years?" She spends the majority of her time in the Disney Parks researching experiences, attractions, and dining to provide the most up to date information possible for anyone planning a vacation.